Scott Nelson figured he’d be spending most of his time answering emails and phone calls about distance education, but he knew that wasn’t enough. As the instructional design video coordinator at the Office of Distance Education and eLearning, he knew that many Ohio State instructors were teaching online for the first time and that many others were just plain uncomfortable with it.

Then he had an “ah-ha” moment. He remembered a time early in his career when he didn’t know a darn thing about teaching online. “It’s easy for me to forget what I didn’t know when I started,” he said.

Nelson realized that the best way to help instructors in need was to make basic, quick-hit videos. And the fastest way, he knew, was to post them on his own social media channels, under his own name. Thus was born “Teaching from the Living Room,” a series of short demonstration videos as welcoming as Nelson’s toy-strewn studio and as informal as the pajama pants he’s been known to wear.

“The goal was to give our instructors small, digestible bites, and do it in a fun way to reassure them that they could put their guard down, that they didn’t have to be perfect, that they could do really simple things from their home to keep teaching.”

The response has amazed him. Not only have Ohio State instructors thanked him for his videos, so have teachers from other universities and K-12 schools, a testament to how fundamental and transferable the information is, he said.

To date, his most popular video by far is “3 Ways to Capture Your Lecture,” with more than 2,300 views on Twitter. The next most popular videos offer tips for creating a simple do-it-yourself whiteboard (675) and choosing the best places to post videos (651). A tutorial he posted just two days ago about stimulating participation in online classes is also picking up steam, with more than 300 views. 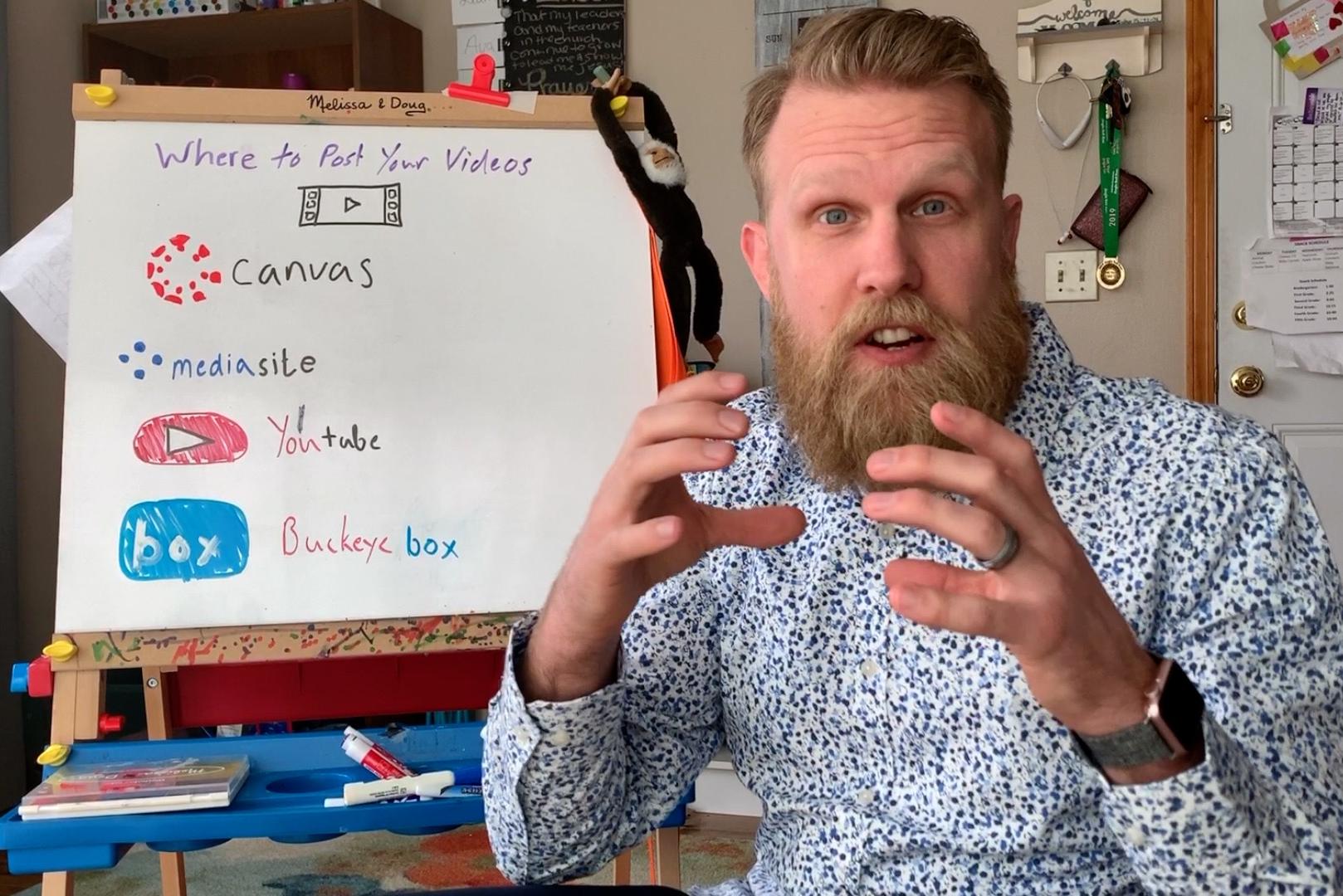 The videos are two minutes long, but each one takes about two hours to prepare, shoot, edit and post. Nelson has made nine so far, nearly one a day since Ohioans were asked to hunker down at home. He initially posted them only on his Twitter account (@ScottINelson but has since added them to a YouTube channel (teaching 4+2morrow) so instructors outside the Twitterverse could find them.

Nelson concedes that working from home is tricky. His wife is a nurse at The James Cancer Hospital, so he’s juggling his work duties while attending to the needs of two young children who occasionally crash his videos.

“Our leaders at ODEE — Mike Hofherr, Liv Gjestvang, Rob Griffiths — they’ve been so encouraging and so supportive during this time. It’s telling that they continue to remind us to put our families first, put our own health and well-being first, even as the university is undertaking the monumental task of moving everything online.”

When asked to reflect on Ohio State’s response to the coronavirus crisis, Nelson said he believes a “paradigm shift” is occurring.  “A lot of instructors who might not have fully understood the online environment now find themselves immersed in it,” he said. “I think they will ultimately look back at this time and realize the opportunity it created to move them into a different space for teaching and learning.”